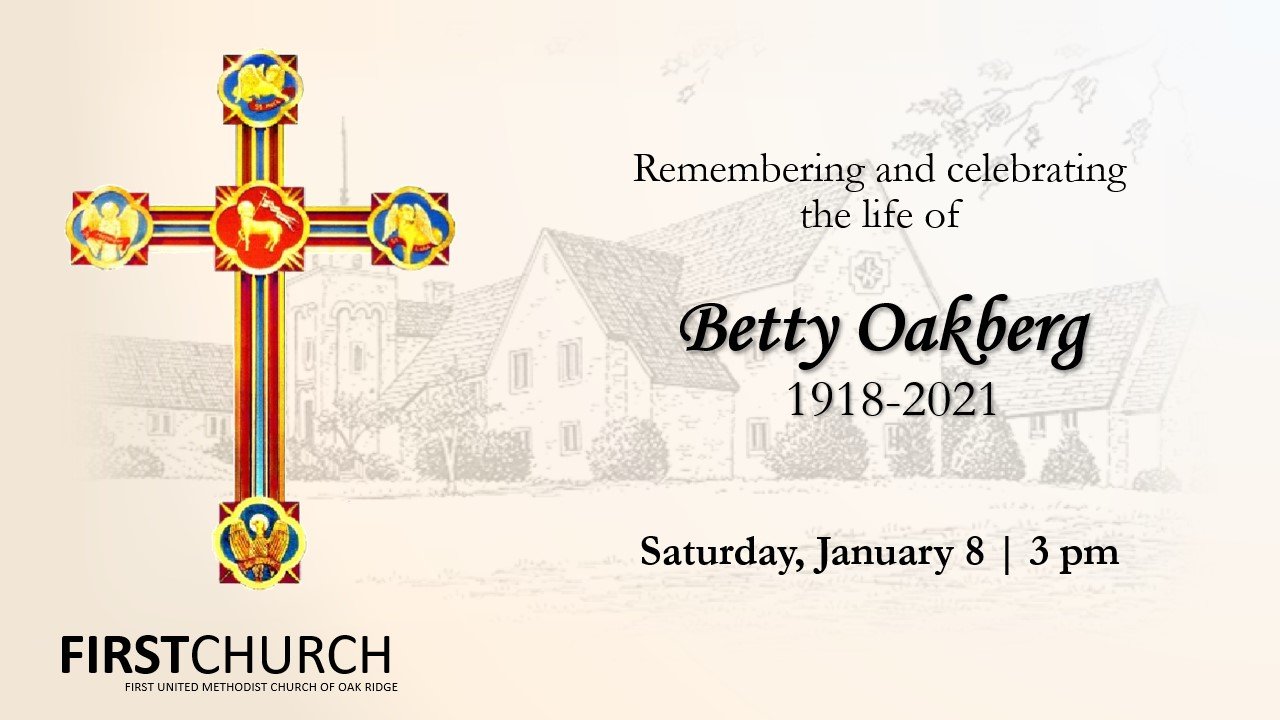 Elizabeth “Betty” Oakberg, age 103, passed away peacefully, December 18, 2021. She was born in Walla Walla, Washington in 1918 to Jessie (Hays) Jones & Bert Logan Jones, MD. She graduated from Monmouth College, Illinois in 1940 with a Bachelor of Arts degree in education and earned a Master of Arts from the University of Iowa in 1942. Later, she completed post-graduate studies at the University of Tennessee. A dedicated educator, she taught in Marion, Ohio (1941-1943), University of Iowa (1943-1945) and worked as a laboratory assistant at Cold Spring Harbor, New York (1945).

Ten years after moving to Oak Ridge, she returned to education and was a beloved and respected third grade teacher at Glenwood Elementary School from 1961 to 1983. She became a member of First United Methodist Church of Oak Ridge in 1953. She taught Sunday school for several years and after retirement volunteered in the Church library until she was 90. She co-authored Worship Programs for Juniors with Alice A. Bays, (Abingdon, 1960). In support of regional Church ministries, she crocheted and knitted many blankets and hats for children and families.

As an active amateur (ham) radio operator, she achieved many awards for operating, and she especially enjoyed contacting countries all over the world. One of those contacts was out of this world, with the Russian MIR space station. She held the highest class of amateur radio FCC license and her call sign was N4LZL. She also served as an officer in the local radio club. In 2020, she was honored as a Centurion Member of the American Radio Relay League, the U.S. National Amateur Radio Association.

True to her character, she gave back, sharing her love, care and wisdom to the end.

The family will receive friends 2-3 pm Saturday, January 8, 2022 at First United Methodist Church of Oak Ridge. A memorial service will follow at 3 pm. Please wear a mask if able. Services may be viewed live at https://fumcor.org/live/. An interment of her ashes will be held at a later time. An online guestbook is available at weatherfordmortuary.com.