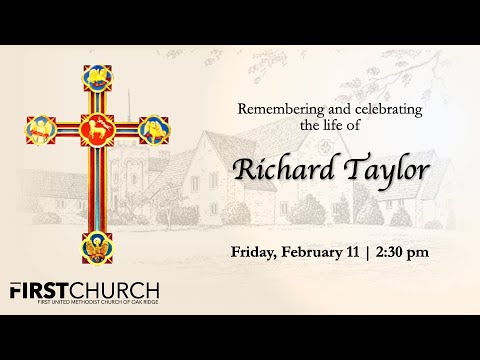 He was born in Hopewell, Virginia, January 8, 1947, the only child of Frederick Gordon Taylor and Marjorie Ruth Burgess. Although it is not well known, he grew up with the nickname “Dickie” until his late teenage years. Richard moved with his parents to Goldsboro, North Carolina in 1950, and to the Biloxi/Gulfport area of the Mississippi Gulf Coast in 1957. He graduated from Biloxi High School in 1964. Richard had fond memories of growing up in both places. After graduating in 1968 from Mississippi State University with a BS in nuclear engineering, Richard began his career at the Oak Ridge Gaseous Diffusion Plant, doing nuclear criticality safety work. He spent a total of 11 years there and 21 years at the Y-12 plant in Oak Ridge. During his tenure, his career highlights included participation in two nuclear weapons non-proliferation projects: Project Sapphire in the Republic of Kazakhstan in 1994 and Project Auburn Endeavor in the Republic of Georgia in 1998. After retirement from Y-12 in 2000, Richard continued his career doing subcontract work and earned two nuclear engineering degrees from the University of Tennessee, an MS in 2008 and a PhD in 2016. During his career, Richard participated as an instructor of short courses at the University of Tennessee and the University of New Mexico. He was a long-term member of the American Nuclear Society and First United Methodist Church of Oak Ridge. He served in various capacities for both organizations. Richard is survived by wife of 51 years, Janna Ellen Brown Taylor; children, Gordon Burdette Taylor and wife, Amy Elizabeth Burgert Taylor, Jullianna Elaine Corrado and husband, Brian Randall Corrado, and Justin Burgess Taylor; and grandchildren, Jackson Hunter Taylor, Camden Gage Taylor, William Carl Corrado, and Annaleise Katherine Corrado. The family requests memorials be made to the Taylor Family Departmental Discretionary Endowment for the University of Tennessee Nuclear Engineering Department, First United Methodist Church of Oak Ridge, or to the charity of the donor’s choice. The family will receive friends 1-2:30 pm Friday February 11, 2022 at First United Methodist Church of Oak Ridge. Funeral services will follow at 2:30 pm with Rev. Jenny Caughman officiating. A private family interment will be held. Online condolences may be left at weatherfordmortuary.com.

To send flowers to the family or plant a tree in memory of Richard Gordon Taylor please visit our Tribute Store.