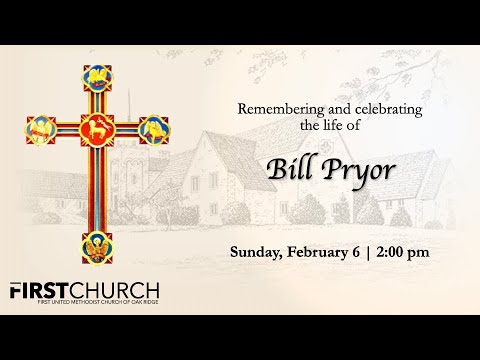 Born September 29, 1928, in Sharon, Tennessee, William was the son of the late James Edward Pryor and the late Martha Brooks Priestley Pryor. His father’s work with TVA around the southeast eventually landed the family in Knoxville in 1941. William graduated from Knoxville High School in 1946 and was drafted by the U.S. Army in 1950, serving his country in Stuttgart, Germany, during the Korean War. In 1962 a trip to the Central American country of Panama to visit his sister resulted in a blind date with Rosemary Carol Nitsche, and their chance meeting blossomed into a lifelong love. Bill and Rosie were married on June 29, 1963, and they shared 57 years of immeasurable devotion and happiness. He treasured his wife above all else on this earth and considered himself the luckiest man alive to have been her husband. He also was fiercely proud of his children, Jim, Becky, and Tom, and grandchildren, Caroline and Joe. William spent most of his working career self-employed, delivering heating oil to homes and businesses throughout the Knoxville area, diligently and honestly serving his customers. After retiring in 1994, he and Rosemary enjoyed social time with close friends from church, traveling to visit relatives, and watching his family grow with marriages and the birth of grandchildren. William loved and served Jesus with his whole heart, and he was a faithful, lifelong member of Laurel Church of Christ.

Among the things that brought William great joy over his full life were early memories with his parents, four older sisters, and younger brother; puckish adventures with teenage friends in his Rose Avenue neighborhood; dove and crow hunting in West Tennessee with his nephew David; watching and sometimes attending Tennessee sports, especially men’s basketball; tending abundant vegetable gardens; gathering with family at holidays; keeping his mind sharp by memorizing poetry and completing daily crosswords; baking bread, chess pies, and molasses cookies and sharing them with neighbors, church friends, and strangers; exercising his right to free speech by writing frequent and impassioned letters to the editor of the local newspaper; and hearing his son Tom expertly play guitar. A pastime that brought much personal satisfaction and enthusiastic admirers was his storytelling, both oral and written. He loved sitting around a dining table after a meal to impart details and adventures from his life — always fascinating, frequently hilarious, and occasionally heartbreaking. To preserve these memories for his grandchildren, he collected them in a book, A Good Life, published in 2015. It is a dearly held account of a life well-lived.

William is preceded in death by his parents, Jim and Mattie Brooks; and four of his siblings: Martha Jim, Mary Emmalyn, Clara Ruth, and Donald Edward. He is survived by his sister Rose Elizabeth. He is also survived by his loving and cherished wife Rosemary; his sons James Arthur Pryor (Kelly) and Thomas Malcolm Pryor (Marisa Ireland); his daughter Rebecca Pryor Hancock (Steve); grandchildren Caroline Brooks Pryor and Joseph William Woodard Pryor; nieces and nephews who dearly loved their Unker; and great- and great-great nieces and nephews.

A physically-distanced memorial service will be held at Laurel Church of Christ, 3457 Kingston Pike, on Sunday, October 11, at 3:00 p.m. The service will not include a traditional receiving of friends, and attendees are required to wear masks. William always loved children and was a favorite among many young people at his church. In lieu of flowers, donations may be directed to the Just Lead Youth Program at Laurel Church, c/o P.O. Box 10248, Knoxville, TN 37939. Friends may call at their convenience at Rose Mortuary Mann Heritage Chapel. www.rosemortuary.com